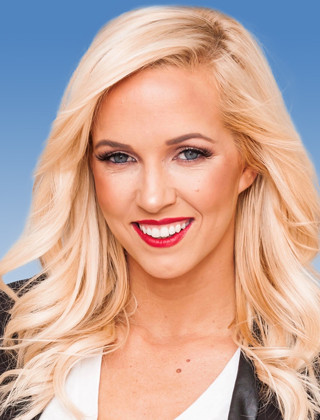 She is a Bay Area native with a deep passion for sports that has led her to where she is today.

From her childhood to her career, she’s always been on the go. She grew up playing softball, baseball, basketball, track and danced competitively.

In 2015, Kirsten found her passion for story telling where she was given the opportunity to interview celebrities and athletes on and off the red carpet at Super Bowl XLIX. From there she went on to report on the red carpet for Super Bowl LI, LII and LII.

While finding her passion for reporting, she knew her dance career wasn’t over. In March 2015 she was given the amazing opportunity to represent the San Francisco 49ers and cheer for the Gold Rush for four seasons.

While cheering, she graduated from San Francisco State with a bachelor’s degree in broadcast communications.

Shortly after graduating, she worked for KRON4 News and 95.7 The Game in San Francisco where she was an assignment editor, digital producer, and digital sports reporter.

Some of the most memorable highlights of Kirsten’s career have been getting the opportunity to interview Kobe Bryant, Stephen Curry, emcee Super Bowl city in San Francisco, and report for the San Francisco 49ers in LIV.

When she’s not watching a game, giving highlights or researching stats, Kirsten can be found taking a dance class, exploring the outdoors, looking for unique eateries within Reno, taking her dog Charles out for a walk and spending time with family and friends.

Kirsten is thrilled to be joining the team and taking a dive into all of what Nevada has to offer telling sports stories that give you an inside look at the man or woman behind the jersey.