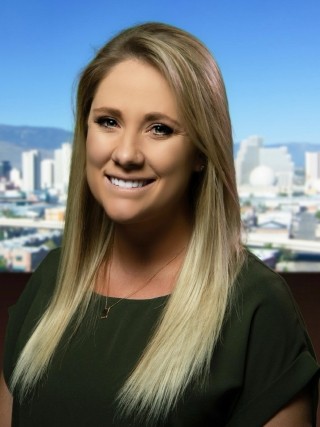 Jenna joined the sports team in January of 2019 as a sports producer after spending three years as the Nevada Athletics digital media graduate assistant. During her time at the University of Nevada, she covered all 16 sports through social media, created graphics and videos to promote each team, and assisted in streaming home events to the web.

She graduated from Lamar University in Beaumont, Texas in 2016 with a Bachelor’s degree in Communications and Marketing. Jenna was a four-year starter for the Lamar Softball team and was the president of SAAC (Student Athlete Advisory Committee) for her junior and senior year. In the fall of 2016, she moved to Nevada to pursue her Master’s degree in Athletic Administration/Educational Leadership and graduated in December of 2019.

Growing up in Atlanta, Georgia, her favorite sport teams are the Atlanta Braves, Atlanta Falcons, and the Alabama Crimson Tide. The majority of her extended family lives in Attala, Alabama, so naturally her first words as a kid were Roll Tide. In her spare time, she likes to travel and experience new cultures and to be somewhere near the water listening to her favorite group, Odesza.